This post in the series looks at merging, resolving merge conflicts, and managing branches.

Merging in Changes from Others

Once I’ve got an idea of what I’ll be pulling down and I feel comfortable with it, I then pull those.

Before merging at first, I could never remember whether I needed to be in the source branch or destination branch. The answer was checking out the destination (git checkout Feature/GuestId) and then merging from source (git merge develop).

First the checkout…… and then the merge.It was amazing to me how often it just worked without merge conflicts like magic – much better than say TFS which would constantly choke on XML files for example.

Eventually a merge gave me a nastygram about a conflict. Running git status then showed this output.

Note the !1 in posh-git status showing one conflict and Git’s message about fixing conflicts before committing.

If there were a large number of conflicted files I might head over to a GUI based Git client. Usually I find there’s often just one or two, or a small handful at most. For these cases I find cycling through the conflicted files with git mergetool to be acceptable. Running that generates output such as:

Now DiffMerge pops up showing me how many manual conflicts I’ll need to resolve in the file and then after dismissing the modal I can cycle through them with the highlighted conflict buttons. 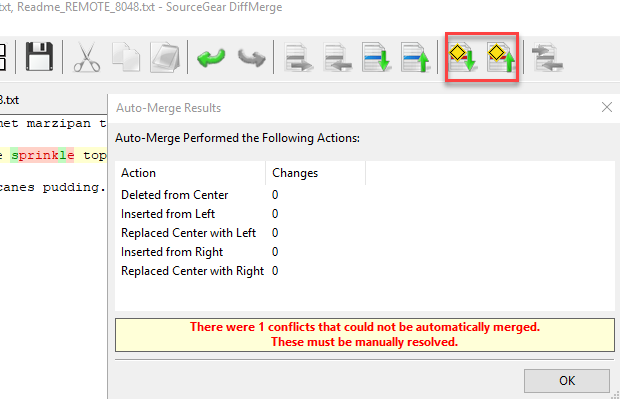 Next I take action on each conflict.

Once all conflicts have been addressed, I save the file and close the merge tool.

Back at the command line I see the conflict resolved but git status tells me more.

Output indicates “All conflicts fixed but you are still merging” and !1 went away in the posh-git status indicator showing me there are now no conflicts.

Note in the above output the Readme.txt.orig file. At that time I didn’t have mergetool.keepBackup set to false so I removed it with del readme.txt.orig. One fix could be adding .orig to the git ignore file though the working directory would eventually get cluttered. I ended up setting this at the command line with git config --global mergetool.keepBackup false to prevent in the future (already set this way now in Part 1 Setup of this series).

At this point the conflicts are resolved so I might issue git commit -m 'Resolved Readme conflict'; git push. With the semicolon both these commands can be executed in one line, saving a little bit of time.

Running git branch by itself lists all local branches and indicates which is current with ‘*’ and colorized output.

Specific local branches can be searched for using --list with a pattern.

In addition to more verbose local/remote tracking info shown by git remote show origin, using git branch -r provides a more straightforward view of remote branches.I’ve not had a use for it yet but there’s also git ls-remote with more detailed remote info.

Git branches are so lightweight that deleting them doesn’t gain much from a disk space / resource perspective. However when viewing a list of your branches / managing branches it can clutter things up to have a bunch of old branches. Once feature branches are merged into develop or master, the commit history will be there so keeping them around doesn’t gain much.

Using git branch -d branchName will delete the specified branch. If a branch contains unmerged changes Git will present an error and require -D to be used to explicitly confirm deletion with risk of losing commits.

Rather than delete a la carte, the below PowerShell function will delete all merged branches, excluding develop and master. I put this in my PowerShell profile but it could probably be used in alias form if desired.