I’ve been wanting to dive deeper into Raspberry Pi development for a while but needed to make the time and find a project. Image classification using machine learning has been an interest so something using the motion sensor and camera sounded ideal.

As it turns out, my significant other’s cat provided an opportunity to put those to use. The cat tends to go places that are off-limits such as the kitchen counter tops. Products like this PetSafe SSSCAT Spray Deterrent exist but require expensive compressed air cartridges and go off with any motion – pet, human, or otherwise. Another option is the Echo Flex with the motion sensor – a time based automation routine can help in the kitchen or maybe a hallway outlet near a bedroom. Other options include fragrances or custom mats but they all leave something to be desired.

The goal for the project is simple: 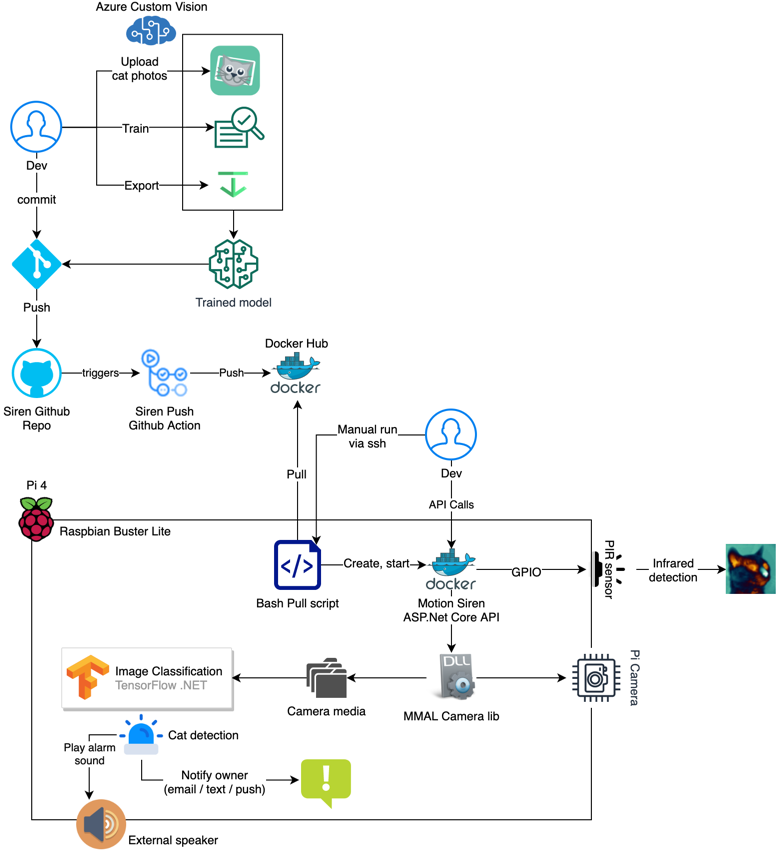 Current and planned topics in this series are broken down into the following posts.

It’s worth noting that not all of the hardware listed below is strictly required for this project. Some of it was used just for evaluation or because I already had it handy and some planned items may not be used. Also some items listed individually can be bought cheaper as part of a bundle.

Raspberry Pi 4 4GB – I use 2 of these, one that’s a “clean” release / runtime target and another that’s for dev debugging and experimentation. 1 is sufficient as are earlier Pi versions. 4 GB is overkill for runtime use but can be handy for dev debugging.

Case(s) – I use an Aluminium Heatsink Case for heavier dev workloads and a basic plastic case for lighter runtime use.

HC-SR501 Passive Infrared (PIR) Motion Sensor – Various versions will do but this one is commonly used with Pi and Arduino and it’s cheap and configurable.

Raspberry Pi Camera Module v 2.1 – I had an older 1.3 rev laying around and it works but image quality suffers.

MakerFocus Camera Night Vision Camera – Since the cat often goes off limits in the middle of the night, I tried this for camera footage in the dark.

SanDisk Industrial MicroSD Card (32 GB) – This industrial version is overkill but is ideal for long-running use and higher heat from the Pi. A basic SD card is fine. 32+ GB is a good size for storage of camera photos and videos.

MicroSD Card Reader – Anything will do. I like the this Anker but if space around ports is tight, a smaller reader may be better though inserting and removing may not be as easy.

UKCOCO Piezo Electronic Buzzer Alarm – Another evaluated option for the siren. Not near as loud as the mini speaker but much more compact.