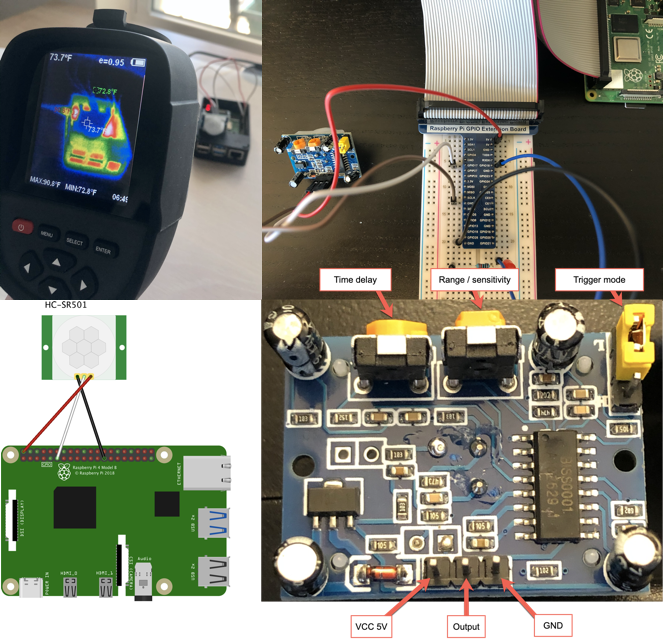 The last post in this Raspberry Pi Cat Motion Siren project covered deploying .NET apps to Raspberry Pi through GitHub Actions and Docker. With the deployment mechanism in place, it’s time to dig deeper into the application code and Pi hardware.

This post covers connecting a passive infrared (PIR) motion sensor to the Raspberry Pi, configuring it, and reading it from a .NET application. Refer back to the project overview for the hardware used in this project.

PIR motion sensors such as the HC-SR501 used in this project work by detecting changes in infrared radiation levels, applying logic to determine motion, and setting sensor output to high when motion is detected. The motion aspect is a bit subjective and can be influenced by the sensor’s hardware settings, the environment, and the application code reading the sensor.

To get a good feel for infrared and to have some fun, a thermal imager can be used. While there are some cheaper solutions like a FLIR One module that attaches to a phone, a quality device isn’t cheap. I bought and returned this HTI HT-18 Thermal Imaging Camera – it’s over $400 and is barely “prosumer” in quality. While I don’t have enough of a need to keep it around, it can be a useful tool for home inspections – electrical, plumbing, insulation around windows, auto use etc. 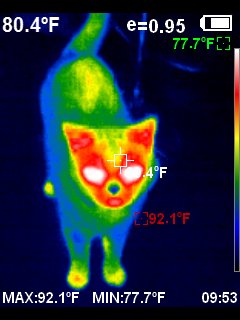 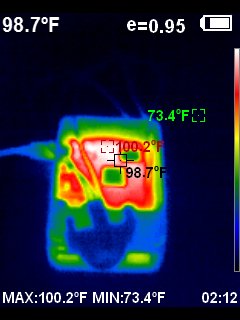 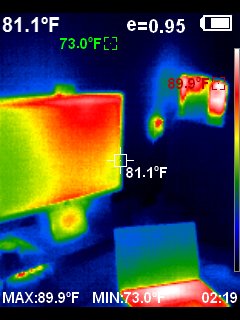 Before getting into the hardware and wiring, this is my disclaimer that I’m not an electrical engineer, hardware guy, or an expert in electronics like the Pi. Always refer to hardware documentation and the experts.

Speaking of docs, one of my Pi accessories kit from China had some poor English in the docs and parts of it appeared to contradict itself or conflict with online sources. It never hurts to cross-reference multiple sources to prevent component damage, injury, and/or frustration.

Below is a picture of my HC-SR501 PIR sensor with call-outs added. Note there are slightly different versions available. 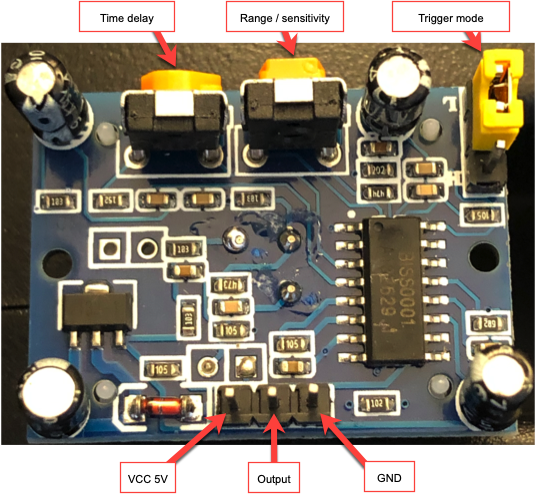 Starting with the connections on the bottom, the leftmost is power / input voltage (5v-20v DC). The middle is output – motion detection results in a high output (3.3v), no motion results in low (0v). On the right is ground input.

At the top there are some adjustable settings, starting with 2 potentiometers on the left and a jumper on the far right.

These settings can influence the code reading the sensor so it’s helpful giving them some thought upfront. I turned the time delay fully left to 3 seconds for a more real-time reading; I can always introduce delays in code. I left the range at its default mid-point setting but that’s something I might adjust later based on the Pi location.

Trigger mode I initially left at single but would later change to repeatable. There’s a 3 second period after the time delay expires where the sensor won’t report anything (will always read low/off). Single trigger mode could result in too many “blind” periods. With repeat mode resetting the timer when there’s still a variance in infrared levels, it can be more accurate and a smoother experience than frequent on/off switching with single mode.

I actually started without the breadboard as there’s less wiring connecting the motion sensor directly to the Pi. However, the breadboard is useful for quick tests and experiments. Also in the spirit of tradition, there’s an unwritten rule that you need to start with a blinking LED and that can be a handy indicator of the PIR sensor state.

Below is my first breadboard diagram attempt using Fritzing; the .fzz files are in the project docs. It requires 3 male/female jumper cables for PIR sensor connections, 1 LED, a 220 Ω resistor (which I cut down) to restrict LED current draw, and 2 male/male cables – 1 for connecting the LED to the Pi and the other for grounding the resistor. 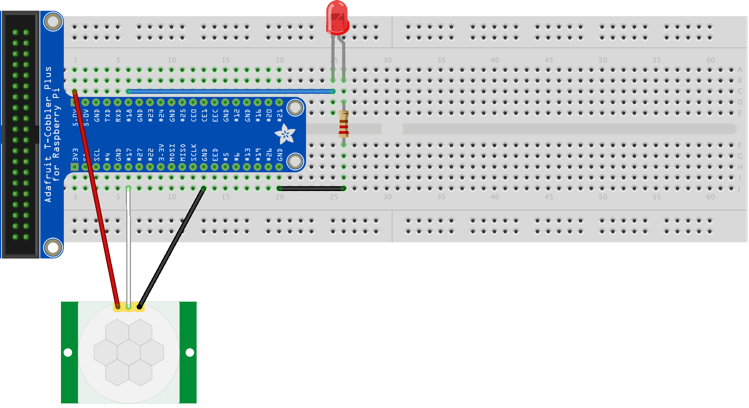 Some of the documentation I used had conflicting information on whether to use 3.3v power or 5v power. While it technically worked with the former, 5v was the safer choice.

It may be helpful to review basic details on Pi wiring, breadboards, LEDs, and resistors. Depending on the power, LED(s), and other details, a resistor with a different ohm rating may be needed; finding similar examples or doing the math never hurts. 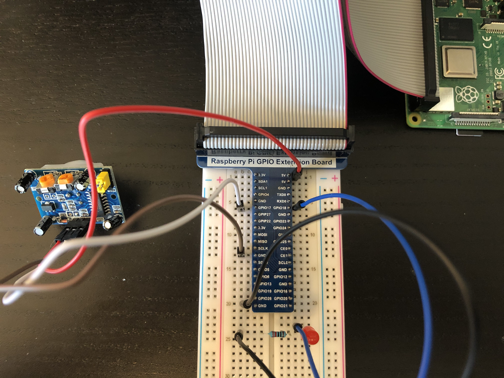 The following code is a quick bare-bones test of this setup. Keep in mind this doesn’t account for how long the sensor has been powered on; it will take a minute or more before the sensor will give accurate readings.

After Deploying to the Pi, a quick test was in order. It’s important to consider the warmup time and make sure you’re well out of the viewing range of the sensor. Here I’m using a 3 second time delay and single trigger mode.

While the breadboard is setup, this is a good time to shutdown the Pi, try different PIR sensor hardware settings, power it back on, and test again to see the effect.

Non-breadboard use is straightforward with 3 female/female jumper cables. 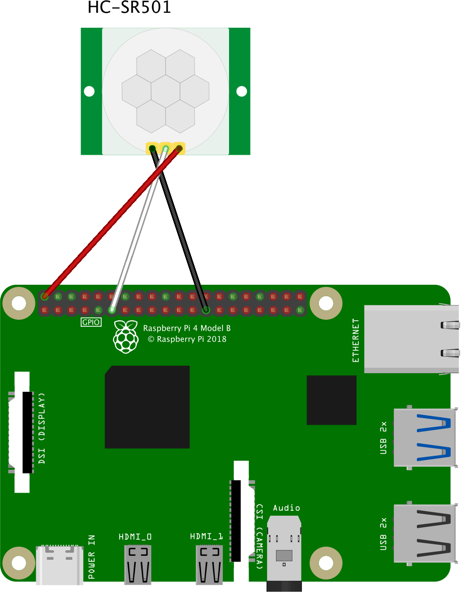 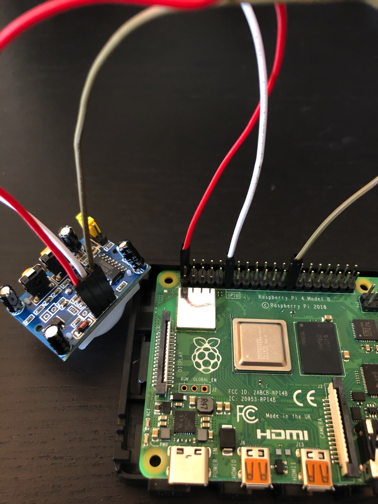 Before .NET Core 3.x, I had used Unosquare Raspberry IO. With .NET Core 3 IoT support and System.Device.Gpio I moved away from Unosquare.

I ended up wrapping the GPIO code as follows.

That was done mostly so I can still test much of the app workflow while developing and debugging on my dev machine. The switch happens at startup when configuring services, based on the current OS and DEBUG conditional.

The simulated GPIO service just adds an element of randomness around whether the sensor is reading high/on.

A MotionSiren class serves as the key logic driver, continually reading the PIR sensor and coordinating actions based on sensor output, elapsed time, and other state.

At construction it creates a state machine to define the siren states and transitions between them. The state machine is arguably overkill but it is handy knowing one current state at any given moment and defining rules to ensure the app doesn’t get in an invalid state. Plus this is a fun learning project, so why not?

I used stateless as the library; I also evaluated appcellerate/statemachine but found it to be more code. Enums are created for the states and triggers. As each state is configured, the allowed triggers are set and each is mapped to the corresponding destination state.

To help visualize the state machine I’d run the below while debugging.

Which outputs this dot graph syntax.

Various tools exist to work with these; I mostly used Edotor. Pasting in the output there and changing the Engine to DOT produced the following diagram.

The MotionSiren entry point performs some initialization and then continues to read and react to the sensor state as long as cancellation isn’t requested / app is not shutting down.

The initialization is mostly just delaying a minute to give the PIR sensor the time it needs to acclimate to the initial infrared levels to establish the baseline for future changes. The assumption here is that the app is starting up when the host boots.

In my case I’m opening the PIR pin and then delaying but I believe the warmup period starts once the sensor is powered on. Using the OS system uptime could potentially avoid the need for a delay in cases.

The SetSensorState method called in the while loop of MonitorAsync invokes the appropriate trigger according to PIR sensor state.

It is important not to mix calls to the Stateless state machine FireAsync and Fire – either they should all be async or none be. The appcellerate state machine makes this easier by forcing creation of either an async state machine or a non-async one upfront.

When the PIR sensor reads high the SensorHot trigger fires, transitioning into the Active state. The state machine setup configured OnSirenActivated to be called when entering this state so it will fire next.

The CaptureFootage trigger leads to the Recording state and entry into that state fires OnCaptureFootage. I’m using the thread pool here for 2 reasons. First, the intent is to use a camera to record several seconds of photos and video and that’s resource intensive. Second, I want to still get console logging progress output while this is executing.

The next post in this series will cover using the camera when motion is detected – for now it’s just a delay. Once the FootageCaptured trigger fires, a Cooldown state begins. This ensures that regardless of the sensor hardware settings that the app isn’t constantly reacting to it reading high and recording camera footage too much.

Here I’m using Reactive Extensions for .NET to trigger the next state after a given duration but a basic timer works. Once the time elapses, a CooldownElapsed trigger will reset the cycle by setting state to Idle.

This app is an ASP.NET Core web API, partially so I can make calls to it externally – maybe to get captured footage for example. The MotionSiren lives inside a MotionHost BackgroundService.

Testing is easier combined with a Pi camera but some isolated motion sensor testing is helpful. Yes that’s a rubber band holding the sensor up – that’s naturally not recommended and is on my TODO list. 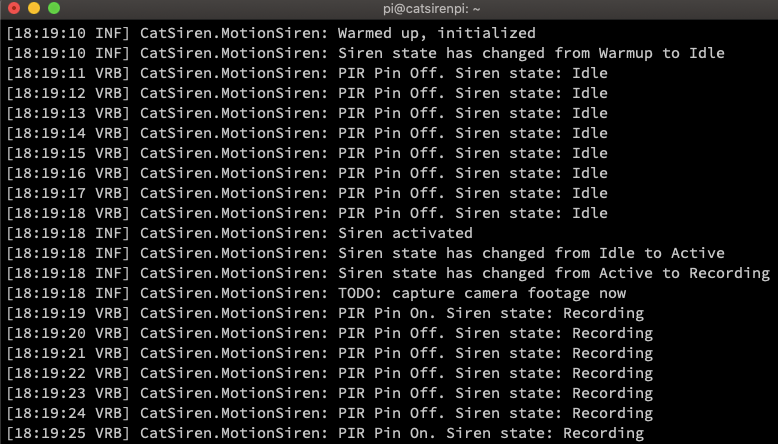 The code for this post is available in this rasp-cat-siren repo.

I found these resources helpful for this project:

Use of an Ultrasonic Range Sensor can be a good compliment to the PIR sensor. This would allow distance approximation which could be used to fine-tune motion response based on target proximity.

The next post in this series will start capturing photos and video once motion is detected. It will cover use of a couple different cameras and camera libraries.

One Thought to “Raspberry Pi Infrared Motion Sensor with .NET”