Since it was first announced I was interested in the Echo Flex and the Echo Flex Motion Sensor to automate lights based on motion. One initial use case of mine was for hallways since they are often away from natural light. Hallways are also passed through frequently so often I’d just leave the light on or off for extended periods rather than constantly flipping the switch. Furthermore some hallways like mine have no three-way wall switch so I can only turn the light on coming from one direction.

My initial thought was to use the Echo Flex Motion Sensor with a smart bulb in my hallway light fixture. Unfortunately it’s a low-profile LED ring light strip and also hard to get at. For that reason I ended up going with the TP-Link Kasa Smart Light Switch (HS200).

Installing the Smart Switch (or Bulb)

If a smart bulb works, that’s the path of least resistance. If it requires replacing the entire light fixture or if a switch controls multiple lights, the smart switch may be a better fit. To begin, I’m no electrician but the HS200 installation is fairly straightforward in their YouTube video and in the Kasa app device setup. 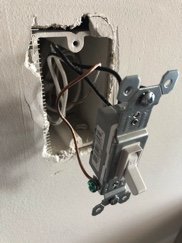 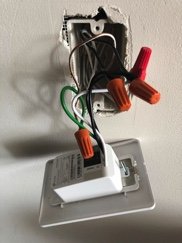 There’s not much to the Echo Flex setup, it’s done like other Alexa devices other than plugging the motion sensor into it. The guided setup is straightforward. I chose to keep the mic off as there was no need to communicate with it in a smart motion sensor role. 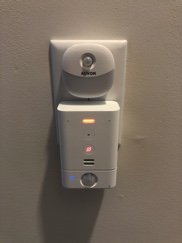 With the smart switch, Flex, and motion sensor setup, all that was left to do was create Alexa app routines – one to power on the switch after motion, and another to turn if off after a few minutes of no motion detected. 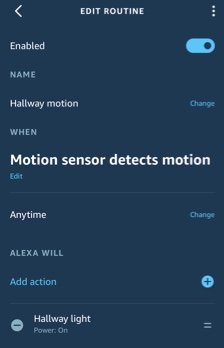 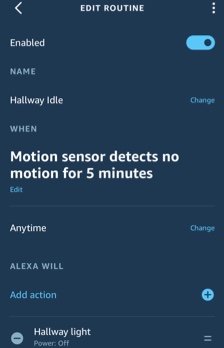 It’s not perfect but it does the job well enough for the price. Other areas like a garage, laundry room, or foyer may provide better results in cases than a hallway.